On the crisis of Islam: In defense of discussion

The murder last month of the French history teacher Samuel Paty, with its atrocious symbolism, marks the latest in a series of terrorist acts perpetrated by young French Muslims, or other Muslims residing in France. As is often the case, it has inflamed emotions to the extreme, rendering it impossible for days or even weeks thereafter to have a reasonable conversation about Islam and related questions.

As secular, democratic intellectuals, descending from the Arab Levant, and from a heritage of which Islam was and is an essential component, we are compelled by this state of affairs to affirm—first of all—that communication between different people, and the thorny examination of complex issues, are the key to disarming the militarization of thought and culture advocated by Islamist nihilists such as Paty’s killer, Abdullah Anzorov, and the many others like him. The more such people succeed in deepening the trenches separating Muslim communities from the world around them, the more they prosper and flourish.

Second, we affirm that this militarization of thought and culture is not limited to these Islamist nihilists alone. Plenty in the West play the very same game, and encourage the Islamists themselves to play it further, for they too seek to deepen the trenches and live in buttressed fortresses, indifferent to all that goes on around them and out on the margins of their settlements.

Foreword to the book Syria: Borders, Boundaries, and the State

The following text is Nassima Neggaz and Ziad Majed's foreword to "Syria: Borders, Boundaries, and the State", edited by Matthieu Cimino and published by Palgrave Macmillan, UK, 2020.
The book gathers a series of papers presented in a conference organized at the University of Oxford in November 2017.
Plus d'infos »
Publié par Ziad Majed زياد ماجد à 14:17

If Whiteness is a metaphor for power as James Baldwin put it, Blackness is a metaphor for being exploited, dominated, expropriated, abused and sometimes massacred by people of power for centuries. But It can also be a metaphor for standing up, struggling and fighting for justice, dignity and equality, with all the risks that such a struggle or fight might engender.
Those who are replacing “Black Lives matter” with “All Lives matter” might in some cases have good intentions. In most cases, however, they remind me of the ones who condemn violence in Occupied Palestine or in Syria putting Israeli soldiers and settlers on the same level with Palestinians who are dispossessed of their lands and homes, or Assadist forces on the same level with Syrians who are bombed, displaced and tortured. To put it differently, their argument is similar to responding to feminist slogans that deconstruct masculine domination, by evoking few incidents that targeted men and thus calling for removing any reference to masculinity or to patriarchy when talking about oppressing women.


“Black Lives matter” is a powerful slogan. It is first and foremost about the protection of Black people from police (and other) racist brutality, about solidarity with them (in the US and in our own countries); but it is also about protecting and supporting all those oppressed everywhere, if blackness is understood as a universal political metaphor… 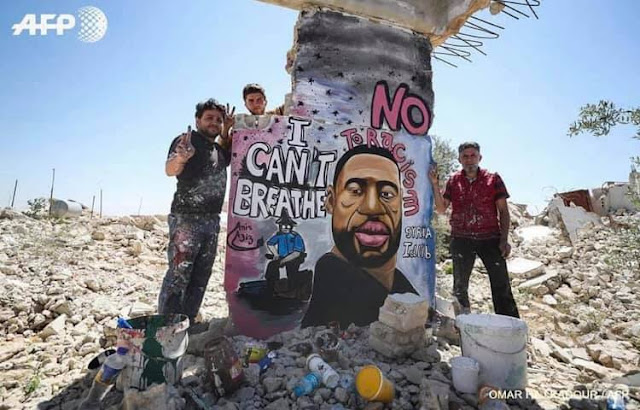 What Is Behind the Tensions Inside Syria's Regime?

In Carnegie's Diwan regular survey of experts on matters relating to Middle Eastern and North African politics and security, Ziad Majed (among other researchers) analyzes the dynamics of the Assad-Makhlouf rift.
"The tensions inside the inner circle of the Syrian regime reflect three dynamics. The first pertains to the family. Since the Russian military intervention in 2015, followed by the death of Bashar al-Assad’s powerful mother in 2016, the Makhloufs (his mother’s family) have been gradually ousted from positions of authority. The measures against Rami, who once controlled more than 50 percent of Syria’s economy, complete this process—after his brother Hafez and father Mohammed. He is being replaced by businessmen close to Asma, Bashar’s influential wife, in an attempt to enlarge the regime’s clientelistic networks.
The second is related to Russian pressure on Assad. Moscow wants to restructure state institutions, reorganize the army, and centralize the decisionmaking mechanisms under its command, in order to negotiate reconstruction contracts with possible Western and Chinese partners and bring Russian companies and entrepreneurs into a fully controlled theater of operations. To achieve such a situation, Iranian influence within regime circles has to be reduced and Syrian tycoons with monopoles (and Iranian ties) should be sidelined. For Assad, this provides an opening to get rid of his cousin, with his bad reputation, and say he is doing his best to fulfill Russian requirements.
The third can be read through the analysis of the regime’s history and the tensions and defections it faced. After the removal of Rif‘at al-Assad, Bashar’s uncle, in 1984, of Ghazi Kan‘an, the strongman of the security services, in 2005, and of Assef Shawqat, Bashar’s brother in law, in 2012, the Makhloufs are now being targeted. This is not surprising in totalitarian regimes with sectarian, tribal, and familial considerations—often built on the basis of delicate equations.
All this means that the regime will be facing increasing pressure and internal struggles in the coming months. Russia needs official international recognition of its hegemony over Syria and its reconstruction projects. Iran will not agree to be marginalized. And Bashar is mainly concerned with his “reelection” in 2021. Meanwhile, other foreign actors, such as Turkey and the United States, are also reassessing their roles and reshaping relations with their local allies in Syria’s northwest and northeast in preparation for the next phases".
To read the full report on Carnegie's website, please click here.
Publié par Ziad Majed زياد ماجد à 10:23

Syria: 9 years of revolution and war

An interview with Ziad Majed on Syria - France 24 English