Every day, death catches the people of Idlib by surprise. It races them to their morning bread, then comes to them in the afternoon and hovers over their beds if they fall asleep. Death wreaks its havoc on their homes and families, along with all their memories, everything crushed under its horrific weight.

In Idlib, death expels the living from their towns and villages, stripping them of whatever remains of their hopes. It turns their faces into maps of tears and tragedies, and fills the roads of their previous lives with convoys of vehicles laden with their shadows and some of their basic needs, along with a great deal of dust.

Death looms over Idlib without moving us. Its atrocities, agonies, and targets provoke no questions or shock among ordinary people, as they are supposed to.
The frost of death on the blue lips of a girl staring into the void no longer makes us wonder how this could happen, and persist for months, if not years. It’s as if everything we see was expected. As if we were already aware of it and we’re just trying to postpone starting up our computers, so that death’s live broadcast wouldn’t dominate our daily routine once again. We lived the same tragedy before in Aleppo, Homs, Ghouta, Yarmouk, Daraa, Zabadani, Madaya, and in the forgotten outbacks on the banks of the Euphrates. 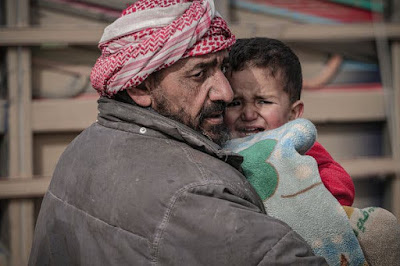 Then we try to write. We try to compensate for the screaming by typing on keyboards and scolding the impotence that has accompanied us through these years. As if we have a duty. To write at least once about Idlib and the extinction of its people. To say that we aren’t tired yet. To follow the developments on the ground and pore over the maps—which don’t show the sweat of the women picking olives, or the children playing with the ball—looking for the “M4” and “M5” highways, seeing which green bits of land have turned red today. To answer the questions asked over the phone by some know-nothing smart alec who wants to “dig beneath the surface” and analyze “Fatah al-Sham,” “the Sochi agreement,” “the dynamics of the strained relations between Turkey and Russia,” and “the forms of Iranian involvement in the fighting after Qassem Soleimani’s demise.”
Yet, if we’re actually to write, what do we say about Idlib today? Who do we address? A public who might be stirred by the trembling fingers of cold and panicking children, or by more bodies buried in the mass grave that is Syria? Or officials, still calling for restraint and calm, and for "sparing civilians the horrors of fighting", and negotiating a constitution and political solution? Or the petty hypocrites who speculate about conspiracies and plots but fail to see death circling over humans wandering below, and the perfidy of death’s odious planes, flags, and slogans? Or do we write to support friends like us? Or to hope that, one day, the starving homeless and the children who thought there was no more to life than escaping the sky, might read us and say that we mentioned them when they were roaming aimlessly, and that we published our words and their photos in newspapers and magazines?

What more could we say about Syria than that already said over the past nine years? About the killing and the killers, the chemical weapons, the rape, the torture, the devouring of corpses, the looting, the displacement and the confiscation of the lands, about the meaning of the world today and the downfall of the "international community," the brutal executions of the victims who wanted no more than an ordinary life, in which they could look upwards and see only clouds, birds, and stars? About the resistance, the doctors, the teachers, fighters, photographers, and refugee women working in scattered camps? Or about the laughter of that beautiful girl whose father banishes her fear by turning the sounds of explosions into moments of fun and life? What, however, if we stopped writing, and turned off the lights, and then the next shells fell on the laughing girl and her father? Or on the kids in the room next door? Would anything change? Would Syria remain the mill grinding away at laughter, heartbreak, reports, and articles piled up and swallowed by insatiable death?

We keep writing, perhaps for two or three reasons. To wipe away a personal shame, or rather to confirm it; the shame of being unable to do anything except continue staring at a calamity; washing our eyes of the remains of its cadavers, then going about our days and postponing our anger, defeat, and hatred. We also write to support the narrative of people we see from afar, people with tears, blood, and sorrows silently flooding their souls, while certain depraved people try to tear up their images and suffocate their glances, burying them under considerations of "international relations," "interests," "jihadists," and "fear of refugees." Finally, we write so that the impunity enjoyed by the known criminals doesn't pass without witnesses and testimonies. As for those silent about, or complicit with, the criminals, to hate and despise them is, most likey, what helps us keep going.

In late 2012, after the battle to liberate the infantry school in Aleppo from the gangs of the Assad regime, the leader of the victorious battle, Colonel Yusuf al-Jadir Abu Furat, said he was sad. Sad for the dead on both sides; sad for the burned tanks and destroyed materiel. He added a question that seemed naive, but was, in fact, the most eloquent and honest summary of the Syrian tragedy on that day: “Why do you hold on to a chair, you bastard?  Why?” Nothing that has happened since that question was posed has been more complicated than the direct answer to it, despite the multiplication of horrors and endless increase in villains dancing over the graves.

Ziad Majed
First published in Arabic, and translated to English by Dawlati.