These crimes should be remembered periodically for multiple reasons: first, so as not to be forgotten; second, to build war crimes cases upon them; and third, to strip immunity from the perpetrators. Additionally, the facts and the contributing factors should be scrutinized in order to dissect the philosophy of Assad’s rule, as well as the political and symbolic goals of the regime’s violence.

The following text is therefore an attempt to do so by focusing on two particular criminal operations, organized simultaneously by the regime within the span of its geographical control (that is, outside of warzones and areas of remote bombardment). Both crimes embody and exemplify the regime’s desired relationship with its “citizens”: confiscation and desecration on the one hand, and the detention of tens of thousands — and killing of thousands of them through torture and the disappearance of their corpses — on the other hand.

On ta'afish (confiscation and desecration) and its meanings

The robbery of houses and private property is not only linked to the behavior of soldiers and shabiha [regime-allied militias or gangs] in besieged or bombarded areas that are then invaded and opportunistically looted — both as revenge and to humiliate the enemy. The issue of “ta'afish [desecration or defilement],” as Syrians call it colloquially, transcends these behaviors or the “field initiatives” and chaos that accompany war.

It is the regime’s systematic policy. Ta'afish offers spoils to fighters defending Assad’s rule and thereby reinforces their loyalty to the regime. In contrast, to the general public, ta'afish reveals their vulnerability and fragility. If they survive being killed, the prospects remain of total confiscation of their public lives, desecration of their private affairs, and expropriation of their household belongings.

Unleashing soldiers and shabiha on the survivors and what survived the destruction of their homes, offices, and workshops is a reminder from the regime to Syrians that they are beings without rights, stripped of their present and whose future hinges on the regime’s whims. The regime has final say in matters of life and death, turning lives to ashes, and confiscating what it wills of personal memories of the intimate past. This includes living rooms, libraries, offices, computers, walls, lockers, drawers, and bedrooms, which in a flash become the property of the thieves, who mess with it and sell some of it in markets known by sectarian names (“Sunni sales”), so that purchasers know the source of what they are buying. In the process, by their actions, the thieves not only rob their victims of their needs and of their past lives, but they also worsen the fear and hatred among other, which could give rise to new violence in the future.

Thus the regime seeks to transform those it rules into two main factions: those who rob (the thief), and those who are robbed (the thieved from). In between the two groups lies the rest of the population: either aghast and silent, or gloating. The only condition, the difference between power and powerlessness, is loyalty to the regime and the act of practicing violence in its name. Impunity depends on silence, the acceptance of humiliations as either duty born of obedience, or as an inescapable form of taxation. 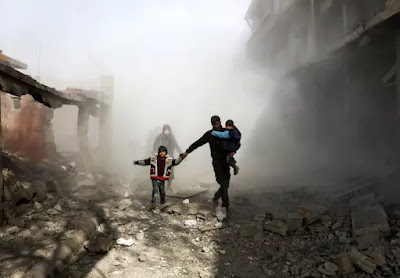 Murder in detention centers and the abduction of corpses

The most brutal, hideous atrocity out of the many types it adopts, is of, course what the regime is doing in its prisons, where tens of thousands are detained, abducted, and missing. It is a mixture of medieval brutality and modern bureaucracy in running the prisons, as machines to torture, kill, and disappear the decaying bodies. The situation is built upon uncertainty, constructed based on rumors, a Mafia-like economy, mysterious deaths, and eyewitness testimonies from hell. There are three levels to the issue of detention and disappearance in Syria today.

The first level is linked to the transformation of detention “management” and torture into a routine bureaucracy. According to Amnesty International and Human Rights Watch reports, by 2017 this had led to an industry of extermination, with at least 30,000 male and female detainees murdered by torture, starvation, disease, or execution. The lens of a military photographer who defected and was given the pseudonym “Caesar” alone documented more than 5,000 of these dead bodies. The corpses were numbered carefully (sometimes sequentially). Survivors from the detention camps testify that they were forced to bear the bodies to trucks that transported the corpses to unknown places.

The second level is connected with the creation of a Mafioso economy, based upon extorting the families of detainees in exchange for promises about the detained: promises of their release, or information about them, or release of their bodies, or protection from severe torture, or providing medication, or transferring them to “less difficult” or “less overcrowded” prisons. Military officers, lawyers, judges, and brokers have all benefited and continued to benefit from the machinery of the regime. They make promises that are often not kept, and provide information that is mostly false. They snap up what is left of the property of the relatives of the missing, in a complementary fashion with the killing machine and its administrative apparatus: the security forces, the judicial bodies, and the intermediaries and promise-making brokers who take whatever is left.

The third level is based upon spreading fear, concern, and a culture of rumors and doubt that not only affect the families of detainees, but also all those around or in contact with them. This is done by keeping every bit of information about the fate of the disappeared as something closer to rumor than to fact, and by refraining from delivering the bodies of those who are said to have perished, then providing death certificates or dates of death to be put in the boxes of official records. This keeps large swaths of society in a constant state of alert and anticipation, as if they are hostages awaiting certainty.  Their loved one never comes out, whether from behind the walls or from under the ground.

Thus, the regime does not conceal its practices and its targets, especially through the theft of victims’ bodies, in order to hide the effects of its crimes. Instead, the effect is intensified: the threat of loss hangs over the heads of the families of the victims and their social networks, a sword suspended over their necks, even if the worst has in fact already happened. Some live in fear of the fate of their missing loved ones. For others, the lack of a body prevents them from mourning and suspends their lives, turning every day into tormented waiting. No affirmation of life, no confirmation of death, no date fixed as long as those involved pass away without a trace. No ability to identify the places of detention or burial. The missing become wandering ghosts, making conversations about them speculative, wishful, and sorrowful.

Living among the ghosts

The Assad regime kills Syrians and Palestinians residing in Syria, and hides many of the murdered. It tortures, rapes, and starves to rebuild the walls of fear and silence that had fallen apart in the year 2011. Pain, hunger, and degradation are engraved in the memories of the survivors. The relatives of the missing remain suspended forever between hope and despair, and they are vulnerable prey for the promises of the regime’s affiliated mafia members, searching for the bodies that have been swallowed up, just as the looters gobbled down the possessions of the victims, their photographs, their past and their present.

Through this, the regime tyrannizes the living just as it does the corpses of the dead. As if this genocidal industry is not content with killing alone, but also looks for ways to turn its victims into ghosts. For there is no murder victim without a dead body. There is no death without a grave. There are only ghosts reminding the survivors every day of what may await them. The ghosts remind the killers themselves of what will follow them if their killing machine totters and the regime collapses.

“Assad’s Syria” is in this sense a Syria of ghosts, a Syria of terror, rumor, degradation, and agonizing waiting. In this, as in other matters, it is no longer a Syrian or regional issue, nor a battleground for established or emerging international actors. It has become an existential issue, which must be dealt with as a challenge to all of humankind. These tens of thousands of ghosts may not remain imprisoned in their soil, behind their walls, or within the borders of the country.