A French military laboratory has established that traces of this gas were present in samples of hair, blood, urine, and soil brought back from the Jobar district northeast of Damascus by two contributing journalists to the daily Le Monde, thus confirming its use against insurgents in April 2013. Yet after the report was published on 27 May, and despite the specific details it contained, the White House merely observed that “the red line had effectively been crossed in Syria” and that this was a “game changer.” It did not decide accordingly or specify in what way the game had changed.


On 21 August 2013, the Syrian Army launched missile attacks on Zamalka, Ibrine, and the shores of the Moadamiyah in the two Ghoutas of Damascus from its bases north of Mount Qasioun. As many as 1,400 people died of asphyxiation, a massacre that could only be explained by the use of a poison gas like Sarin.


After negotiations at the UN, a decision was made to send a commission to the scene to investigate the use of a chemical weapon. This agreement, however, had been reached under the conditions imposed by the Russians and the Chinese: The mission of the commission was limited to verifying whether such weapons had been used, and did not involve determining the identity of the user if chemical traces were to be found on the bombed sites. Three weeks later, the Commission of Inquiry published its report [2], confirming the massive use of Sarin gas. The report described how the attack had unfolded, the kind of munitions used, and the orientation of the impact craters, which is indicative of the position from where the rockets were fired. This position turned out to be near the bases of the Republican Guard, the Fourth Division, and the 155 Brigade Tiger Forces north of the capital [3]. Human Rights Watch and Doctors Without Borders also published reports confirming the use of Sarin gas, as did other French, German, and American organizations. All of them insisted on the regime’s full responsibility for the massacre.


Between 22 August and 8 September 2013, the great powers engaged in consultations on the response that ought to be given to this “serious crossing of the red line by Assad,” and on the possibility of launching a “punitive” military strike against him. Yet the Security Council was paralyzed, because the Russian (and Chinese) position remained hostile to any intervention under the auspices of the United Nations. Exchanges between Washington, Paris, and London therefore focused on the idea of an intervention directed at military targets (airports, rocket launching bases, and headquarters) which could draw support from some Arab and European countries.


In fact, neither the US administration nor the British government were keen to launch a military strike, despite their declarations and shows of determination. The two powers were seeking a solution that would let them save face after so much posturing. Several reports on the contents of the meetings at the White House and at the office of the Secretary of State revealed the lack of enthusiasm of President Obama, who was obsessed with his image among voters and who did not want to be associated in any way with George W. Bush and his Iraq war [4]. The British government, for its part, tried to extricate itself from the situation by submitting to parliament a motion authorizing military action in Syria, which was defeated by 285 votes to 272 on 29 August. This gave Obama an additional reason to retract. Obama called for a congressional vote, even though the Constitution did not require him to do so since there was no question of deploying troops on the ground or of launching an operation lasting more than 60 days. Preliminary estimates had in fact shown that the majority in Congress was opposed to intervention. This, of course, greatly embarrassed the French authorities, who were the most favorable to the idea of ​​a “punitive strike.”


On 9 September, Moscow informed Washington that Damascus was willing to dispose of its chemical weapons permanently (which in itself constituted an acknowledgment that they had actually been used!). This strengthened the position of the US administration, which felt that the threat of using its power had suffice to obtain this concession. The Russians and the Americans (the latter had not informed their French “allies” of their contacts with Moscow) then agreed to have the regime turn over its chemical weapons and sign the international convention on chemical weapons in return for avoiding Western strikes. 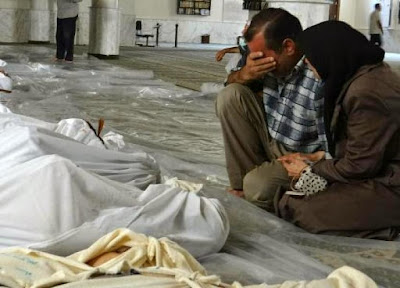 Thus, the international situation returned to what it had been prior to 21 August: very strong Russian and Iranian support for the Assad regime, alarming incoherence on the part of the “Friends of Syria,” with the French and others feeling that they had been cheated by the United States, and frustration among the Syrian population, which was convinced that the international community’s refusal to assume its responsibilities towards their country was unprecedented.


In parallel with these diplomatic developments, Washington, London, and Paris, along with Berlin, Brussels, Rome, and other Western capitals, became the scene of popular campaigns led by left-wing and right-wing forces and parties which put forward pacifist and sometimes even pro-regime slogans. These campaigns called on Washington and Paris to reverse their decision: They compared the Syrian situation to that of Iraq in 2003, and obscured, either deliberately or out of ignorance or naivety, the fact that a chemical weapon had been used in Syria—an established fact that was not based on suppositions or fabricated evidence. Campaigners also pretended to forget that the current American administration had no desire to intervene, and that what was being discussed was air strikes, not invasion or ground intervention. The various arguments advanced in favor of “non-intervention”—e.g., not wanting “to play the role of the world’s policeman,” “to add fuel to the fire,” “to arm opponents we do not know” [5], or “to act without UN authorization”—failed to consider that in the specific case of Syria, only a strike against the military machine that had killed thousands of human beings could limit destruction and loss of life and reduce the duration of the war. To opt for “non-intervention,” to let the Russian and Chinese vetoes indefinitely paralyze the Security Council, was to accept more massacres and executions and to guarantee the immunity of the killer.


In fact, this opposition to military intervention in Syria expressed by most sectors of public opinion reflects two major tendencies in the political culture of Western countries today.


The first is the isolationist temptation of a large part of the population, whose interest in affairs beyond its borders has declined significantly. The world has become for them a source of fear and concern, and this for both economic and cultural reasons. This turn inwards has translated into the abandonment of universal principles, at a time when no country is safe from the consequences of crises that occur in other countries.


The second tendency in this new culture is the loss of confidence in leaders experienced by different categories of the population. Relations with politicians are now tainted with suspicion as to their real intentions. Many Americans and Europeans did not believe their governments when they announced that they would “punish” the Syrian regime for its crimes against humanity, and suspected the existence of other (shameful) reasons behind this decision. This tendency further accredits ready-made “conspiracy” theories that explain all that goes on in the world.


That said, and regardless of real US intentions, the crucial days between 21 August and 9 September 2013 did show that a fairly firm international threat, combined with the possibility of military intervention (even a limited one), was sufficient to terrorize the Syrian regime, and to prompt Moscow and Tehran to help it find a political escape along with an offer that would have been unthinkable in other circumstances.


In the end, Assad saved his regime by renouncing the weapons that he had been parading as a deterrent force against Israel. The inhabitants of the Ghouta suffered both from the inaction of those in power and from the indifference of world public opinion towards the use of weapons of mass destruction in 2013—one century after such weapons were used on a massive scale in WWI, and 85 years after an international convention banning them was signed [6].


From 9 September until today, thousands of Syrians have been executed, killed, or injured, not counting those who have made into refugees or prisoners. Consequently, the families of the victims can only feel that what they call “the whole world” is responsible, just like Assad, for their tragedy.

[1] It is considered that the regime used chemical weapons for the first time on 23 December 2012 in Homs, and then in a limited manner in other areas, mostly as part of military operations against impregnable insurgent positions.
[2] The report was published on 16 September. It appears in full at: http://fr.scribd.com/doc/168606795/U-NReport-on-Chemical-Attack-in-Syria.
[3] These are the best equipped and best trained forces of the Syrian army, and also the most loyal to the regime, as they are commanded by men who belong to the family of the president. For a military analysis of the attack and of the weapons used, see the expert blog http://brown-moses.blogspot.fr/.
[4] See, for instance, the article “Inside the White house, a head-spinning reversal on chemical weapons” published on 15 September 2013 in the Wall Street Journal: http://online.wsj.com/news/articles/SB10001424127887323527004579077401049154032.
[5] The argument that the opposition should not be armed, or that “weapons should not be sent for fear that they may fall into the wrong hands,” weakened the revolution militarily and allowed the regime to remain in place. Moreover, the argument was false, because the Western actors involved did know their military interlocutors (of the Syrian opposition), and because several studies clarified the situation on the ground—for instance, that of Bassma Kodmani (political scientist, director of the “Arab Reform Initiative” and former spokesperson for the Syrian National Council) and Felix Legrand entitled “Empowering the Democratic Resistance in Syria”: http://www.arab-reform.net/en/node/593.
[6] Before Assad, only Saddam Hussein had broken this convention by using “mustard gas” against Iranian soldiers in the mid-1980s, and then against Kurdish civilians in Halabja in 1988.
Publié par Ziad Majed زياد ماجد à 14:15