Arab Spring: how women are using their bodies to create a revolution

In conservative societies, men have always subjugated women by exercising control over their bodies. The female body, virgin and fertilizable, shackled, covered and concealed, is the object of all manner of prohibitions and obsessions. It is both coveted as the symbol of family honour and stigmatised as a source of temptation and discord - the word in Arabic is fitna, by Nadia Aissaoui and Ziad Majed (Original text in French translated by Eric Rosencrantz, Mediapart.fr).

To challenge this very obsession, women in several Arab countries are bent on overturning the established order by putting the issue of their bodies at the heart of public debate. They want to show a patriarchal society that a revolution really is going down - and that it won’t be happening without them.

Defiance in Egypt against sexual harassment

It all began in Egypt when the scandal broke about the virginity tests women protesters were forced to undergo in military detention. This practice, hitherto unknown and hushed up by many women for fear of being stigmatised by their families and society, was denounced by a woman named Samira Ibrahim as a deliberate effort by the army to humiliate women protesters. Ibrahim took the Egyptian military to court and won when the administrative tribunal in Cairo ruled that the tests were illegal.


In another humiliating act, this time in full view of rolling cameras (see below), a veiled female protester was dragged down the street in Egypt, beaten and stomped on by security forces, who tore off her clothes, exposing a blue bra underneath.

This incident sparked public outrage and a spate of political, cultural and artistic (on posters and in graffiti) reactions.

Such violence reflected a determination to curtail women’s civil and political rights. Stripping off their clothes was an act specifically aimed at humiliating them as well as suppressing their freedom to assemble, to protest, to move through public space at all. The fact that these women were veiled added a symbolic message of intimidation from the powers that be: from now on, no woman would be spared harassment.

The blue bra used as a symbol by protesters

Samira Ibrahim’s denunciation of police brutality and of the violence done to other women has given rise to a protest movement, in Egypt and elsewhere in the Arab world, that puts the body at the focus of calls for freedom, dignity and self-determination. Since then, a great deal has been said and written about sexual harassment, and campaigns to stir up outrage at this widespread social evil have been steadily gaining momentum. See for example the 'map of harassment' created in Egypt.
At one demonstration in Beirut women prominently displayed a blue bra on a protest banner.


Another Egyptian woman, Alia Al-Mahdi, scandalised the nation when she posted a nude picture of herself on her blog.

Al-Mahdi’s unthinkable act of transgression in exposing herself on the web triggered a deluge of anger and indignation in the blogosphere – even in the progressive circles that had mobilised in support of Samira Ibrahim against police violence. What unsettled them most was that this photograph exhorted them to rethink the revolution, to see it as a quest for absolute and unconditional freedom. Some bloggers disparaged it as an excessive act that had more to do with exhibitionism and provocation than with social subversion.

Still, the fact remains that Al-Mahdi got plenty of attention and, detractors aside, set off a worldwide wave of sympathy. To show their support for Alia, one group of Iranian feminists designed and publicised a Nude Revolutionary Calendar (see below): the point was to send out a message of solidarity with women in general and Iranian women in particular.

Various individual initiatives have helped to boost this nascent emancipation movement through affirmation of the female body. Two actresses, one Tunisian, the other Iranian, recently posed for magazines exposing parts of their bodies. These revealing poses, far from being isolated instances of merely anecdotal interest, have clearly become a means of reclaiming freedoms far too long denied. 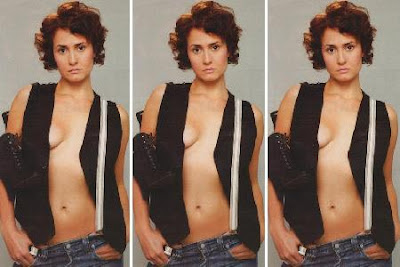 In Syria’s extraordinary and regrettably bloody revolution, the body is being used as an artistic medium of political expression. Women have decided to pit pictures bearing messages of freedom and resistance against those of mutilated corpses or stories of rape and torture. 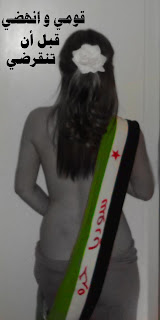 Their approach turns the body into an (aesthetic) messenger of individual and collective independence, of political and ethical resistance. The photo below by Lobna Awidat is a perfect illustration.

Although far from winning unanimous support, these photographs, as in Egypt, have given rise to a widespread debate between those in favour of this form of expression and those who deem it counterproductive.
Furthermore, above and beyond the incitement to regain control over our own bodies, nudity expresses the will to wage a non-violent struggle of ideas. A naked body signifies that the only weapon it carries is the message it puts across. A number of men have adopted the same method of non-violent resistance, standing bare-chested in front of army tanks at demonstrations or in photographs circulating on the web (see below). 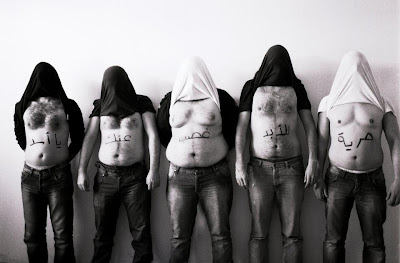 Syria: The words read 'Freedom in spite of you, Bashar'

Cyberspace and the human body

It is the virtual world of the web, more than anything else, that has enabled this process of redefining individual identity in terms of the body, which can now be freely and unconditionally displayed. Exempt from censure and censorship, cyberspace has become the realm par excellence for the free exercise of civil rights. In cyberspace, people are free to show their bodies and others are at liberty to behold them or not, as they see fit. What this amounts to is a quantum leap from an extremely codified and tightly controlled public space to a cyberspace in which anything goes.

The body, as a theatre of combat, conquest or liberation, is becoming a pivotal issue in the Arab revolutions. Some women are retaking that hitherto confiscated space in a bid to stop the violence and its perpetrators. Even if these women still constitute only a small minority within the Arab world, the wide impact of their actions suggests that something irreversible and uncontainable is taking place. 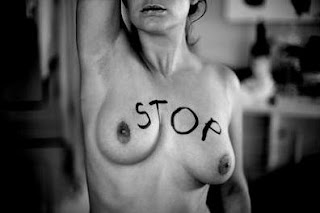 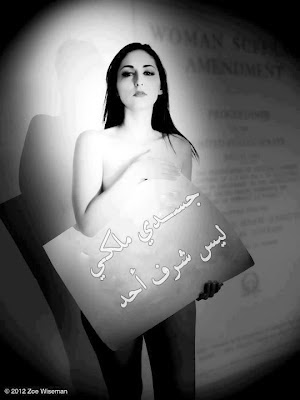 'My body belongs to me, it is nobody’s honour'

Women have revived the universal feminist conviction that, now more than ever, “the personal is political”.
Publié par Ziad Majed زياد ماجد à 21:58